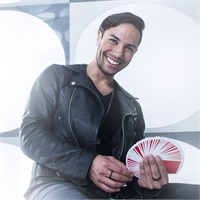 Alex Ramon has mesmerized millions around the world with his magic, which has been described as, “Mystifying” by The New York Times and “Mind-Bending” by the Los Angeles Times. For over 2 years Alex headlined his show ‘Illusion Fusion,’ at the Horizon Resort Casino in South Lake Tahoe. His show became the #1 attraction in Tahoe on both YELP and TripAdvisor.

He is a recipient of the Milbourne Christopher “Illusionist Award” becoming 1 of 20 magicians in history with this recognition. He was the “Magical Zingmaster” for Ringling Bros. and Barnum & Bailey circus, and is the first magician to be the star of The Greatest Show on Earth. Alex toured the globe as the star of Disney Live!“Mickey’s Magic Show” performing on 4 continents in 14 countries. At age 18, Ramon received the coveted Lance Burton Award and was named “National Stage Magic Champion” by the World Magic Seminar in Las Vegas. He’s been seen on the CW’s “Penn & Teller Fool Us” and has made Whoopi Goldberg levitate on ABC’s “The VIEW.”

Logan Paul was trained by Alex on an epic underwater escape for his webseries “Logan Paul Vs.” The episode had millions of views within a day.

Ramon has consulted on world-class productions such as “Magic To Do” a spectacular musical revue paired with mesmerizing on-stage illusions. Created by Oscar, Grammy, and Tony award winning composer Stephen Schwartz and exclusively presented on Princess Cruises, Alex trained the cast how to perform the sleight-of-hand magic necessary for this production. He also trained and choreographed the magic and illusions for Sesame Street Live!“Make Your Magic” currently touring the USA.

Alex Ramon is recognized for his contagious energy and innovative approach, which have reinvented the art of magic, bringing magic to new audiences and devoted fans the world over.