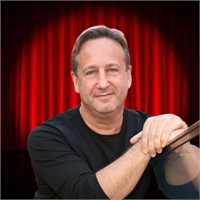 Darren is the founder and President of IFWA, committed to continue serving the arts and entertainment community.  In 1999, he conceived and co-founded TheaterMania.  While working with several theater productions to market and sell tickets online, he identified the need for a consumer destination site for information and tickets.  He assembled a team of experienced journalists, programmers, and marketing professionals and soon launched TheaterMania.com.  As Co-Founder & President of TheaterMania from 1999-2017, he helped streamline the connection between audiences and theaters nationwide and provided the theater and arts community with tools and services to both serve their mission and grow their organizations.

In 2005, in response to clients’ requests for affordable ticketing software, TheaterMania created OvationTix, a fully integrated, cloud-based ticketing, CRM, and fundraising solution which serves more than 600 theater and arts organizations nationwide.  In 2013, TheaterMania acquired the London-based media and ticketing company WhatsOnStage.   In July 2017, TheaterMania.com, Inc. was acquired by AudienceView. The combined company proudly serves over 2,000 arts organizations in the US, Canada and the UK.

Before launching TheaterMania, Darren worked in the music industry as both a songwriter / performer in the band Sheelah-Na-Gig and a marketing professional. In the late 1990’s, during the early days of the Internet, he developed some of the first online marketing and sales programs for artists and bands.

Darren continues to promote culture as a board member and avid supporter of Hi Arts (formerly the Hip Hop Theater Festival), since 2003. In 2015, Hi-Arts became the resident organization of the revitalized PS 109, and in 2016 it was named official Hip Hop Curator of the renowned Kennedy Center.

Darren is a co-producer of the acclaimed, groundbreaking Broadway show The Great Comet, which received two Tony Awards in 2017 after receiving the most Tony nominations of any show that year. He has been involved with the production since its tent debut in the meatpacking district in 2013, and is now looking forward to the upcoming national tour and future international productions as well.

As an entrepreneur who supports downtown Manhattan culture and nightlife, Darren is a co-founder of Kitty's Canteen, a secret hideaway restaurant featuring Jewish soul food and unique events that became a staple in the thriving Lower East Side.

In 2018, Darren and his brother Erik created the Institute of Financial Wellness for the Arts to provide financial education and personal planning solutions to the people of the arts and entertainment industry.  The company is expanding rapidly and has already served thousands of artists and arts professionals.