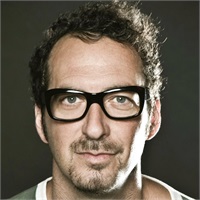 David Bar Katz’s prolific writing career spans film, theater, television.  Among his accomplishments is the multiple Tony Award nominated show Freakwhich he co-wrote and directed on Broadway.  The show also earned Katz an Emmy nomination for the HBO presentation of the play (directed by Spike Lee)

Katz’s play The History of Invulnerability,which is about Superman, the Holocaust, and the Man of Steel’s relationship with his creator Jerry Siegel, won the 2010 American Theater Critics Association/Steinberg Citation for Best New Play, the CEA “Best Premiere of the Year” and the Acclaim Award for “Outstanding Play”.

Katz has worked as a screenwriter at every studio in Hollywood.  Previous film work includes rewrites on the New Line feature films SPAWN and TO WONG FU, THANKS FOR EVERYING, JULIE NEWMAR and THE TURING TEST, which Katz developed with Will Wright, the creator of SimCity and Spore. Most recent writing projects include: SUICIDE SQUAD II for Warner Brothers and DC, UNTITLED FBI WEDDING PROJECT at Universal as a vehicle for Jason Bateman to direct and star, and REAL, produced by and starring Will Smith. His script THE MAN IN THE ROCKEFELLER SUIT, written for Fox Searchlight made Hollywood’s ‘Black List of best unproduced screenplays.

In television, Katz was the co-creator and a head writer for the Emmy-nominated FOX TV series HOUSE OF BUGGIN’, the first all-Latino comedy show in network history. Katz has developed shows at HBO, Showtime, FX, Sundance Channel, and Disney. Katz’s current premium cable projects include WITCHES, at MRC, produced by Drew Barrymore, OH, THE POWER, at Legendary, produced by Sam Rockwell and BLACK KISS with director Zack Snyder.

Katz is a graduate of Williams College where he was a varsity oarsman and a member of the only undefeated heavyweight boat in Williams College history.  He lives in Manhattan with his four sons, not far from the site of his great-grandfather’s Yiddish theater.