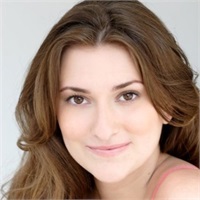 Lauren Nordvig is an actor…who hails from Jacksonville, Florida. She graduated summa cum laude from The University of Florida where she received her Bachelor of Fine Arts degree in Theatre Performance. Highlights of her Academic Career include maintaining her Honor Roll/Dean’s List status all four years, receiving the Outstanding BFA Senior Award/Scholarship for 2007-2008, and playing roles like Viola in Twelfth Night, Varya in The Cherry Orchard, Ensemble in an original adaptation of O Brother, Where Art Thou?, and touring Russia as a Fairy in the rock opera/cirque adaptation of A Midsummer Night’s Dream. While in school, Lauren was trained in the Lessac vocal technique under the tutelage of Yanci Bukovec and went on to teach workshops and mentor others in the method. She is also trained in Aerial Movement, with an emphasis in silks, static trapeze, lyra, and stilts.

Lauren has had the privilege of working with many fine theatre companies. She appeared as an Ensemble member in the NY Premier of “Passion Play” by acclaimed playwright Sarah Ruhl, produced by Obie Award-winning Epic Theatre Ensemble and directed by Mark Wing-Davey. The Pearl Theatre Company has been a constant source of further education, Apprentice opportunities and Off-Broadway mentorship. Other regional theatres like Lake Dillon Theatre (where she was nominated for a True West Award for Best Supporting Actress in a Comedy) and The Hippodrome (FL) have also been amazing hosts over the years. In fact, Lauren is now a proud Company Member at The Hipp and looks forward to performing with their amazing group of artists for many seasons to come. Strangemen & Co (a young and vibrant New York-based troupe known for their critically-acclaimed off-bway hit The Woodsman at 59E59) has also become a new creative home, naming her an Artistic Associate in 2015. She’s pretty pumped and digs their mission—’to simply honor what is truthful, one story at a time.’

Lauren is first and foremost an international theatre enthusiast. She has traveled to Moscow, St. Petersburg, London, The Dominican Republic, and Berlin (so far!) and was privileged to see theatrical milestones like the Robert Wilson/Berliner Ensemble anniversary production of Three Penny Opera, and the Punchdrunk Theatre Company phenomenon Mask of the Red Death, just to name the top favorites. As a result, she has been infused with the passion to pursue a career in which she can travel worldwide and investigate what the entire theatrical community has to offer–in search of a living, breathing theatre, which has the power to excite and inspire the modern audience!

In “real” life, Lauren has worked for a top NY Branding firm and Interned for Boneau/Bryan-Brown, the premier theatrical Press Agency on Broadway, working on shows like “God of Carnage,” “Mary Stuart,” MTC’s acclaimed production of “Ruined,” and the 2009 Tony Awards. She enjoys traveling the world over, journaling, broadening her film education with movies new and old, reading voraciously, visiting family all throughout the US, listening to every genre of music, bragging about her Norwegian heritage, and is a proud member of the Gator Nation! Lauren currently resides in New York City and is represented by The Luedtke Agency.