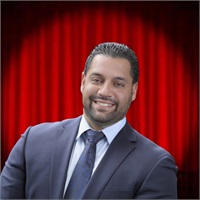 Mitch brings in over 12 years of operational experience in the financial services industry to the IFWA. While starting his career in 2007, Mitch gained experience assisting in various departments learning the many behind the scenes operations in a financial services firm. With his innovative ideas, eye for detail  and strategic processes, he aligned himself with a Fortune 500 company in 2012 and became the Operations Coordinator and then became the Director of Operations.

His community involvement includes supporting the creation of SpendforED, (with being their mascot) a charitable organization dedicated to raising funds for public schools.

Mitch is originally from Queens, N.Y  and was raised by his grandparents. His unique upbringing made him believe in hard work and getting things done the right way.  He holds his Queen's roots close and remembers the lessons from the neighborhood well.

He is a huge movie buff!  He likes to remember one of the lines from “Sam “Ace” Rothstein”, Robert DeNiro’s character for his role in Martin Scorsese’s hit movie “CASINO”:   “I WANT AN EQUAL AMOUNT OF BLUEBERRIES IN EACH MUFFIN!”  He uses this line to guide his attention to detail and the importance of the little things.